8 Benefits of Hugging and How You Can Change the World 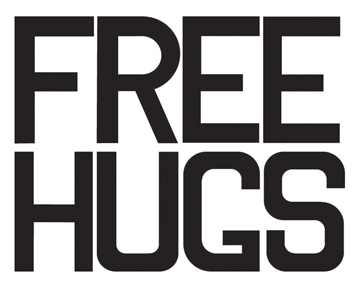 “A hug is a universal medicine, it is how we handshake from the heart”.  -Anonymous

How good is hugging?! Seriously, we all need to hug more. The good thing is, hugging is free, you can do it anytime, and it is the perfect way to not only put a smile on your own face, but also put a smile on the face of another person!

Hugging is Number 12 on the 43 Habits of Absolutely Happy People (AKA the Happiness Manifesto). There are so many benefits to hugging and I will get to these shortly. However, I firstly wanted to highlight the story of a man who has changed the world through hugging.

The Man That Inspired The World Through Hugging

There’s no doubt about it that you would have seen this man, heard his name or at least experienced his movement. His name is Juan Mann and he is from my hometown – Sydney, Australia.

After spending some lengthy time abroad in London, Juan returned home to Sydney.

Upon his return and entering into the arrivals terminal, he witnessed passenger after passenger pass through the exits into the smiling and crying arms of their family and friends, laughing together and being welcomed warmly back home. Unfortunately for Juan, there was no one there for him. He longed for the feeling of having someone there for him, to smile at him, to laugh with him, to hug him.

So what did he do about it?

As any person would, right?

He created a cardboard sign that says ‘FREE HUGS’, went to the busiest intersection in the city and stood there hoping to get a hug.

For 15 minutes he stood there with strangers staring right through him, no hugs, no take-up, nothing… but then the beauty began.

He recounts that his first hug was from a lady whose dog had died that morning and it was also the first anniversary of her daughter’s death. As he knelt down and gave her a hug, he witnessed the most amazing thing in this world. He alone had turned around one of the darkest days of this woman’s life and noticed her walk away with a smile.

WOW. Now that is powerful.

The snowballing of hugs started to flow. Police then banned Juan and his growing hugging army from hugging due to public liability fear and red tape, however through the good hearts and support of humanity, this is no longer banned and has become a worldwide movement.

Have you experienced the Free Hugs Movement?

Have you taken part in the Free Hugs Movement?

The Benefits of Hugging

Hugging just simply feels awesome! It also increases the level of oxytocin, a hormone responsible for bonding and sexual reproduction (otherwise known as the ‘love hormone!’). As a result, this obviously makes you feel calmer and less anxious.

3)      Hugging can enhance and deepen your relationships

Not only does hugging release oxytocin, but it releases serotonin and dopamine, helping you to feel good and lift your mood. That means when you’re hugging someone, you’re feeling pretty good. As a result, your relationship with this person will strengthen and you will connect at a deeper level. Taking this a step further, this then has flow on effects to having a more positive relationship and will benefit a number of other areas of your life… a spiraling happiness effect!

4)      Hugging is comforting and can comfort another person

Linking back to Juan’s story above, he transformed the feelings of a stranger and put a smile on her face while she was experiencing one of the darkest days of her life. He did this simply through comforting her with a hug. Does someone you know need comforting? Go give them a hug!

Hugging can ease depression and ease tiredness from those that experience chronic weariness or tiredness. Through the release of the hormones above, feeling comforted, enhancing relationships and lifting moods, depression can be reduced and those feeling tired can feel more energized.

Not getting naughty here, but as mentioned above, hugging can strengthen and deepen your relationships with others. Also, it releases all those nice hormones as mentioned above. Through hugging, you can get close to others and build relationships with your significant other (or potential significant other) and things may start to flow. Need I say more!

Seriously, how good are hugs? They JUST FEEL SO GOOD. If you want an awesome life, then hugging can keep your moods high, ensure your happiness and also help you become more confident.

Has a hug changed your life?

Do you have specific hugging techniques?

Have you ever done something as crazy as what Juan did?

I would love to hear about it in the comments below!

50+ pages of guides, exercises, tools, and templates to help you get clear, get motivated, and get started on your best life.