Imagine this. It’s a bright, sunny Saturday afternoon and you’re standing in the busiest area of a major city. You’re wearing ridiculous amounts of bright red, in a silly costume or outfit and you’re swinging around a flimsy rolled up newspaper you found that you feel could actually be used for a weopon! You’re talking silly and saying that you’re trying to find a large duck that’s running through the city. You’re saying obscure things like you’re trying to deck the duck?! People are stopping and looking at you wondering what on earth you are up to. Sounding a little silly? Sounding like you might be seen to be a little weird? Crazy? Percieved as someone that you would probably be a little hesitant to talk to? I would completely agree!

Now how about if you’re not alone. You’re accompanied by over 150 other people all similarly dressed in ridiculous amounts of red and dressed in weird and wonderful outfits. Everyone is laughing and having a good time, still saying obscure things like they want to deck a duck, but hey, maybe those onlookers will start to think that you are just having a bit of fun! All of a sudden, a van pulls up and out steps a large Duck! Handcuffed! You and your army in red all cheer and raise their paper weoponry!  The onlookers now curious. They stand by watching and entertained by the spontenaity of what you and your fellows are doing. 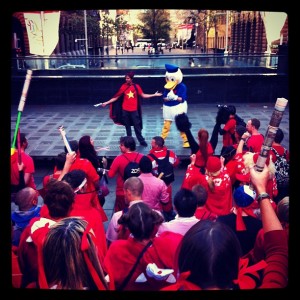 The red army gathers around as the host of the day starts talking through the story of how this duck has come to be handcuffed and presented in the middle of a busy city. But alas! The Duck is released! He runs! No wait, he sprints! Trying to get as far away as possible. Meanwhile, you’re restlessly waiting with the red army, counting down at the top of your lungs from 60 seconds. “10! 9! 8! 7! 6! 5! 4! 3! 2! 1! Deck the Duck!”

Enhancing Your Relationships Through Shared Experiences

What you have just experienced here, is how being a little bit silly can build your confidence and enhance your relationships. By being part of a group that is doing such a silly, sponteneous and random thing, it enhances your relationships with those taking part. It creates an “Us and Them” mentality when it comes to who is an insider and who is an outsider. It creates a secret or a bond and most importantly, a shared experience in which no other person on this planet has been able to share in. By doing this, it enhances your relationships. It builds trust between you and the others that are taking part in the shenadigans. The sillier this activity is, the more memorable it will be and the more of a ‘story’ it will become that only you and the others taking part will be privy to.

So what happens to the Duck? He went sprinting off through the streets of the biggest city you know. The countdown had finished, and you and your red army start chasing after the Duck, trying to hunt him down as fast as possible! Sprinting through the streets and dodging innocent bystanders, you see the massive Duck about 100 metres ahead running past bewildered onlookers. You know the race is on! It’s a race for the first person to Deck the Duck! If you Deck the Duck, you become the Duck! A crazy day of complete sillyness and shenadigans that only those that are brave to step outside of their comfort zones will endure.

Building Confidence by Being a Little Bit Silly!

Now what happens if YOU ACTUALLY DO IT? Unless you’re a street entertainer or a regular cross-dresser in public, you will probably have the feelings mentioned above of uneasiness. This is a GREAT thing! You’re stepping outside of your comfort zone and challenging yourself. Even if you are unaware at the time, you are building your confidence. Everytime you try something new or have an experience, you’re adding that to your ‘memory bank’ in which you can call upon for future reference. For example, by going a little bit silly in public like this, you may feel less nervous and present better when giving a public presentation. More so, if you were to do this same, crazy thing again, you will know what to expect and your confidence levels will be much higher.

Go a little bit silly! It’s good for you! Make it public! Not only will it build your confidence and enhance your relationships, you will have a pretty damn fun time doing it as well!

This is something that I got to experience on the weekend. The above scenario is exactly what happened in the annual ‘Deck a Duck’ through the streets of Sydney, where an army of 150 people dressed in ridiculous amounts of red where charged with the task of hunting down and Decking the Duck! The best part of the day? I Decked the Duck!

When have you gone a little but silly in a public place? How did this make you feel and how did it enhance your confidence? Have you had shared experiences that have deepened your relationships and bond with those around you? Would love to hear your thoughts!

4-Day Training to Your Email

Where Shall We Send Your Free Training?

Enter your name and email below to access your 4-day training series.